Amy Stone also known as Amy Benichou-Stone is a multi-facetted and visionary spiritual guide and teacher. Her colleagues and clients call her an “inspirational and mystical psychologist”. Her talent lies in her ability to focus on the individual’s core identity and bring out truth and authenticity hidden behind the veil of unwanted conditioning. She’s a student of life and is passionate about studying and exploring the human condition. As she puts simply “A life with no confidence and trust is not worth living. Abundance, satisfaction and success are our birth right, not a dream that sadly never gets realized.”

Her passion for tearing off the masks to reveal the authentic self in all of us began in childhood taking care of her deaf sister, as well as a stroke in 2002, which totally change the course of her life, as she had to discover new and unexplored pathways to complete her full recovery, which led to countless visions and revelations to surrender to her destiny.

She first graduated from Seattle Pacific University with a degree in Communication and Journalism. Writing became an integral part of her journey to this day. She calls it her “journey into inner nakedness.” Finding her voice and living as herself to “boldly go where no woman has gone before” became the fuel and inspiration to plunge into the therapeutic realms and the many forms of psychology she ended up exploring and using.

In 2002, she immersed herself in a weekly therapy group for ten years in Los Angeles, which focused specifically on Jungian psychology processes. It was a turning point as she realized that traditional therapy is ultimately extremely limited. She decided to get certified at the LA County’s Mental Health School’s Jumpstart Program, which led to working with several groups and doctors on food and nutrition. To complete her training, she graduated from the North West Culinary Academy in Bellevue, Washington to become a creative chef.

Her journey in psychotherapy further called her to lead workshops in Non-Violent Communication and graduate from Landmark Education’s advanced curriculum in leadership, personal development and large group therapy. After divorcing her first husband, she founded a group for women whose husbands came out of the closet. Later, to broaden her scope, she investigated and completed A Course in Miracles with Marianne Williamson, studied Shamanism and journeyed in South America. She also explored Buddhism and Kundalini Yoga extensively, as well as Longevitology, which is energy work taught in Chinese. In addition to practicing the healing arts and psychology, Amy is also a businesswoman; she bought and ran the Inn at Blackberry’s Castle in the Virgin Islands for two years in addition to working with Jaclyn Smith whom she met in 2013.

Amy lives in Provence, France with her husband and partner Eric Stone also known as Eric Benichou-Stone. She's the mother of three grown children. Actively engaged in their own lives and marriage, they combined their respective backgrounds to create Quantum Design Technology also called “Performance Impact Therapy”, a new science and methodology dedicated to helping individuals and business professionals awaken to their true potential and self-confidence using psychology, art and theater. Their motto is “When you stop searching for happiness, it finds you; all you have to do is ask the right questions and trust life in you to deliver.”

Eric began his journey in France. His mother, Arlette Oger, was an artist and Beaux-Arts professor who influenced him greatly; so did his uncle, André Benichou, who was a stage actor and director running a national theatre company. "Watching my uncle direct and perform in countless classical and contemporary French, English and American plays was one of my favorite pastimes and completely revolutionized my childhood." He was his first acting teacher.

Eric Benichou-Stone's favorite quote is "Until one is committed, there is hesitancy, the chance to draw back—always ineffectiveness. Concerning all acts of initiative and creation, there is one elementary truth the ignorance of which kills countless ideas and splendid plans: that the moment one definitely commits oneself,

then Providence moves too. Whatever you can do, or dream you can do, begin it. Boldness has genius, power, and magic in it. Begin it now." Goethe

Eric moved to New York City in 1978 at the age of 19. "I became a student of Herbert Berghof and Uta Hagen and I was made an honorary member of the famous Actors Studio in 1981, which gave me the opportunity to observe and work with Lee Strasberg and studio members. During that time and later in Hollywood, I also studied the Meisner, Michael Chekhov and other important techniques with exceptional teachers and actors such as William Hickey, Judith Unland, Gary Patterson, and Bob McAndrew. Their impact on my growth and development was extraordinary and I am deeply grateful for their generosity."

Eric began to work in the New York theater and in film and television. In 1980, he became the national on-the-air regular host for TELEFRANCE USA, a national cable network show devoted to French cultural programming. It paved the way to doing commercial work, voice overs and  joining Screen Actors Guild. He also attended New York University film school and started coaching, directing and study with famous dialect coach Alice Hermes, which landed him several roles on Broadway and Off-Broadway for the famous Public Theatre. He moved to California in 1986 after landing a role on PUTTIN' ON THE RITZ, a pilot for CBS.  It opened the way to various starring roles in soaps, series, and a few movies. "I enjoyed TV work and movies but it never was my medium of choice; live theater is so much more satisfying to me."

He founded the Hollywood Actors Studio in 1989, a safe and creative environment for artistic discoveries, growth and development. "Coaching came at a very important time in my life when I was not only searching for new avenues to express myself but needed to redefine myself in relationship to acting. The truth is that I never intended to teach acting, it pursued me and revealed to me I had an enormous commitment to people being self-expressed." In the late 90's, Eric was creatively ignited once again and began a successful journey in art. Philippe formally studied with well-known art educator and sculptor Francis Coelho, in San Francisco, CA. Exhibitions of his work have taken place worldwide in more than nine countries including those at MOCA Museum of Computer Art in New York and his paintings are found in many public and private collections in the U.S. and around the world. He is the recipient of several awards and mentions for his artistic merit. He continues to study art as it relates to self-knowledge, individual empowerment and the healing potential of color.

In 2003 he founded "Speakers & Artists International, Inc."; a California Corporation delivering training programs and strategic consulting in the arenas of Communication, Public Speaking, Media Appearances, Performance and Personal Growth & Development. The turning point to commit to empowering public speakers and business professionals was the realization early on that business people, public speakers and communicators thrive on performance skills and direction. "Meeting my wife Amy was the crowning of my final creative and personal journey, as our paths fused together so beautifully and on so many levels. The creation of Quantum Design Connection is indeed a quantum leap into a brand new future helping people reach their full potential with ease, humor and efficiency." 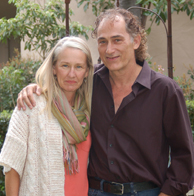 Bridging the Gap To an Extraordinary Life

We are in-depth problem solvers! Putting our fingers on where it is uncomfortable so as to create and sustain quantum leaps into new patterns, authentic perspectives and new behaviors.

We assert that success in the world is a behavior and the embodiment of the spirit of that behavior, not the roles we play, your title or the millions you or your company may earn.

Do you know where your spirit is lately? Brand spirit is a behavior not a number on a screen at the end of the quarter. A behavior breathes, has a body, a heart, a mind, a personality and a spirit in a multitude of qualities and variations. It starts within. You have to be willing to see what is in the way of your unique individual expression.

A Cutting-Edge Approach to Living Creatively as Yourself

Quantum  Design    Are you ready for the miracle of your life?

© 2016 Quantum Design All rights Reserved          An Extraordinary Way of Living Where Mind is No Longer Running the Show, Just Enriching it.